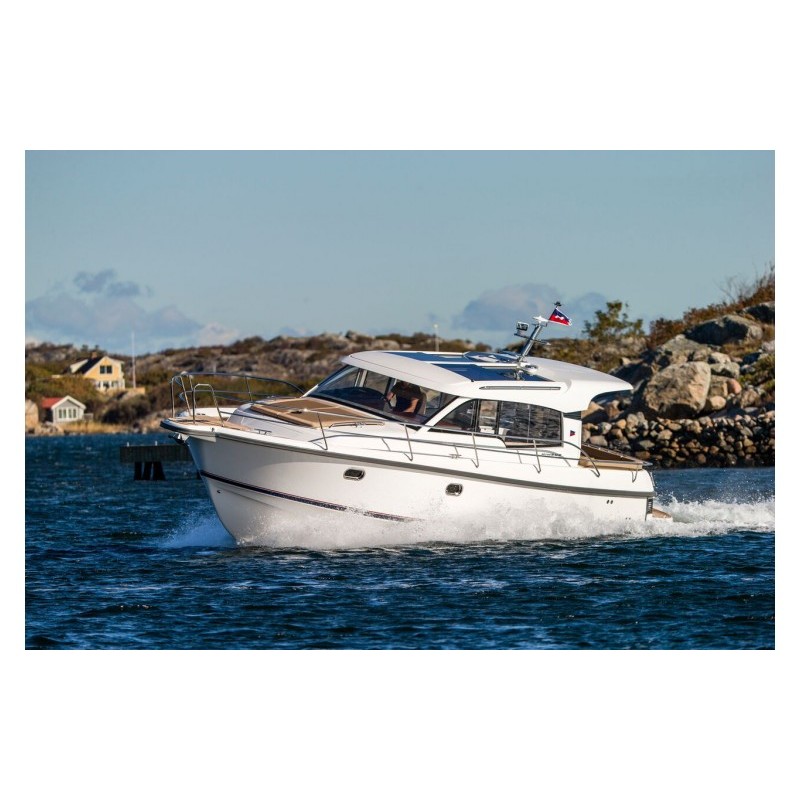 Nimbus 365 Coupe new version offer 2 cabin and 1 bathroom with a separate shower. The boat is specially designed for family who like to have fun and want to go on long cruises while living aboard in comfort and style. The focus has been on enhanced functionality and increasing on-board comfort, ease of use and flexibility.

The most eye-catching feature of the new boat is its appearance. The new 365 has a more modern design language, with sportier contours inherited from its sisters the 305 and 405. The intention has of course been to provide the boat with a new appearance more in harmony with the rest of the Coupé range but above all it is a matter of improved functionality.

Examples of this functional and improved design are stronger bumper list, improved visibility from the helm position and saloon, a new D-pillar with integrated ventilation, double sunroofs giving more natural light in the saloon, an extended aft roof for better shelter and easier canopy handling, a new, improved side door and redesigned pulpits with improved functionality and safety.

“With our new Coupé models, we are reaching an entirely new and generally younger target audience, one that prioritises simplicity, quality and socialising. This process began with the introduction of the 365 Coupé side-walk design, which won European Powerboat of the Year 2012. Since then, all new Coupé side-walk models have been nominated for or won prizes. We are positive about the future and feel secure in the knowledge that we have a series of really great models stuffed with functionality that we know customers want,” says Jonas Göthberg, Marketing Manager at Nimbus.

The interior of the 365 offers genuine quality with beautiful dark mahogany creating a delightful contrast to the light varnished surfaces and a feeling of warmth. The boat has two cabins – the master cabin and guest cabin – with a common toilet. An innovation is that both cabins are equipped with high cupboards/wardrobes for increased storage. Bulkheads in cabins are fabric covered in light sound-absorbent material. LED lighting throughout the boat is well thought out and creates a cosy interior as well as being functional. Integrated ventilation makes a considerable difference to air circulation and quality.

Available space in the saloon has been maximised and it feels lighter and more spacious than the previous model.

The main reason being the extra-large glass roof for generous natural light and two large sunroofs (electric or manual) with integrated blinds. The saloon has large flat surfaces but still feels snug.

The reversible passenger sofa has space for two adults or one adult plus two children who can face in the direction of travel. The U-sofa in the saloon is large and has room for a large table, with ample space for four people to eat or six to relax in comfort. The U-sofa easily converts to an extra double bed.

The boat has laminated windows with a large arched front windshield, a new flush-fitting sliding door to starboard and a fully openable window to port.